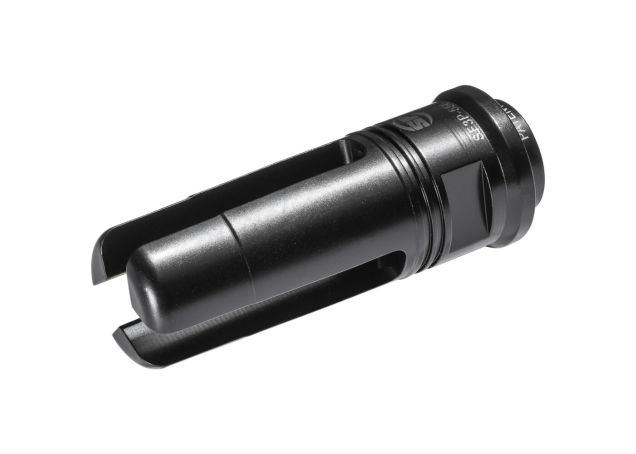 Boasting robust tines built to withstand the rigors of combat, the SF3P-556-MK46 also serves as a rock-solid mounting adapter for SureFire SOCOM Series Fast-Attach suppressors.  The Surefire SF3P, or SOCOM Flash Hider, is nicknamed so because the SOCOM RC2 can is what employed by US Special Forces.

Precision machined from US mill-certified heat-treated stainless steel bar stock—and including high-precision single-point cut threads for optimum thread interface—the SF3P-762-5/8-24 flash hider is given a black Ionbond DLC coating to provide maximum protection under harsh environmental conditions and to facilitate cleaning, even after extreme use.

When used in conjunction with a SureFire SOCOM Series suppressor, the patent-pending design of the SF3P-762-5/8-24 provides multiple bearing surfaces to ensure superior suppressor alignment and to prevent the audible ringing of tines inside the suppressor. A rear labyrinth seal minimizes potential carbon buildup in the indexing system and facilitates suppressor removal after extended firing.

SureFire flash hiders are individually inspected for concentricity and alignment and are covered by SureFire’s No-Hassle Guarantee.