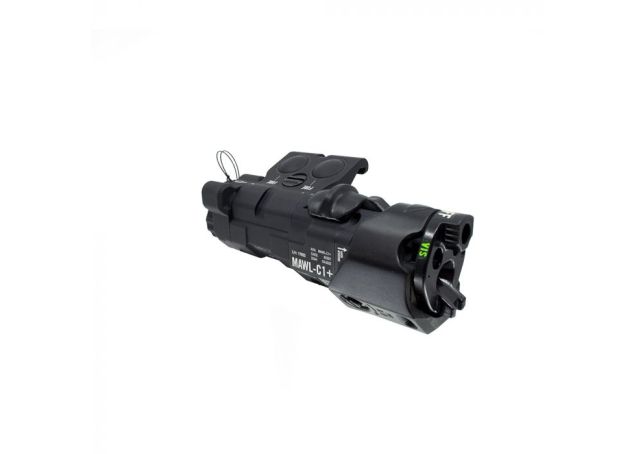 Skip to the beginning of the images gallery
Best Seller

In Stock and Ready To Ship

Weapon Outfitters is proud to announce that we are offering the Class 1, civilian legal versions of the famous MAWL-DA. The MAWL-C1+ (Modular Advanced Weapon Laser - Class 1+) is a full-featured visible green and infrared aiming and illumination laser. Designed with direct user input from Special Operations groups who had lots of time with PEQ-15 and other infrared laser devices, the engineers at B.E. Meyers wanted to produce the laser that our troops wanted, while being more ergonomic, mission adaptable, and completely ambidextrous. This new version features a threaded end-cap, which allows for toolless battery replacement and ease of access to the battery compartment.

Operators have found that on shorter carbines, rail space became a premium and the MAWL was developed to address the use of space and ergonomic shortcomings of lasers that had been on the market. The MAWL-C1+ mounts offset from the rail: This is to minimize impact on hand position and optic field-of-view. The activation buttons sit just 0.37" above the surface of the top rail, allowing for a snug fit with common weapon lights and micro BUIS set-ups.  This laser is fully ambi-dextrous and modular, allowing users to easily switch the base from left to right side mounting.  The MAWL C1+ is also low profile enough that users can still activate the laser and manipulate the weapon when shooting offhand: simply rotate the weapon slightly for better ergonomic control when offhand.

The MAWL revolutionizes control with three simple output settings controlled by one switch. This concept allows users to switch from short, mid, and long range presets on the fly. The MAWL-C1+ is optimized for CQB distances out to 200+ meters.

The BE Meyers MAWL Class 1+ Laser is ITAR restricted and can only ship within CONUS.